How much more are they going to spend? With them being linked to players like Xabi Alonso and David Villa still it doesn’t look like it’s going to slow down soon.

So far Real Madrid have bought the following players:

Manchester United reported that they received the £80m for Ronaldo in a lump sum, I wonder where the money is coming from, the Real Madrid sales team better get out selling some shirts in the street now to pay for this little lot and any other friends that join them 🙂 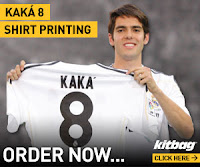